At first glance, the Ursa Mini 4.6K looks like an attractive option due to its low price – the PL mount version will set you back $5,495 – but that only includes the body. Add those ‘nice to haves’ like a viewfinder, battery, charger, and media cards, and the camera costs you about the same as a Sony FS7.

After a great many delays in trying to get both rolling shutter and global shutter to work, Blackmagic Design finally released the Ursa Mini 4.6K earlier this year. BMD bills it as an affordable, feature-packed camera. However, after looking closely at what is actually included with the camera, we realize it is not any cheaper than a comparable Sony FS7.

Here is a chart comparing the Blackmagic Ursa Mini 4.6K with the Sony FS7:

The Ursa Mini 4.6K records natively in ProRes. At first glance, this may seem like a very attractive feature, that is until you consider that ProRes takes up a lot more space than Sony’s XAVC-I codec. As you can see from the table above, Ursa Mini 4.6K media cards will set you back $370 for 128GB, compared to $170 for the same size card for the Sony FS7. That large cost difference is magnified because the ProRes codec gobbles up three times more storage than the same amount of footage shot on the Sony FS7. 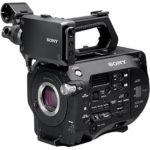 To summarize, the Ursa Mini will cost you about as much as the well-proven Sony FS7. Based upon specs, the low light capability of the two are close – the Sony FS7 goes up to 2000 ISO, while the Ursa Mini 4.6K maxes out at 1600 ISO. The ProRes codec that the Ursa Mini uses might have a slight edge in quality (although almost indistinguishable – watch this video to see a comparison of the two.) over the XAVC-I codec, but once again, that minuscule improvement comes at the extremely high cost as far as storage space is concerned.

Whichever of these two cameras you decide upon, you can buy them from Z Systems. Give us a call if you have any questions.

Click the links above, call us or email us to order a Sony FS7 or a Blackmagic Ursa mini 4.6K