The re-imagined desktop PC starts at $2,999, features the a 28-inch LCD touchscreen, a hinge to move the screen to a more horizontal position on a desk, and a new peripheral – the Surface Dial.

Changing How You Think About Windows

Microsoft is betting on a paradigm shift in the PC market. “The last 10 years have seen a lot of innovation indexed largely toward content consumption,” Microsoft CEO Satya Nadella tells USA TODAY. “But the next 10 will be indexed toward content generation. It’ll be about what we can create.” To that end, the Surface Studio is loaded with design features that aim to make it easier for designers, animators and illustrators to do their jobs. Microsoft is definitely trying to get the attention of those content creators who may currently have an iMac and drawing tablet sitting on their desk right now. 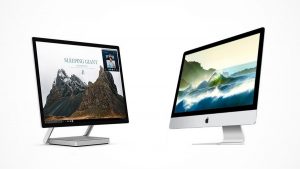 The 28 inch PixelSense monitor, said to be the thinnest and brightest on the market, has a DCI P3 color gamut for richer, more brilliant graphics. It has a 3:2 aspect ratio and 13.5 million pixels for a total of 192 PPI.  It also has what Microsoft calls a ‘Zero Gravity Hinge’ which allows you to move the monitor from a standard, upright angle to a horizontal angle for drawing on the touchscreen with the Surface Pen. In addition, you can rest your palm on the screen while drawing without triggering the touchscreen. The display is powered by an NVIDIA GeForce GTX 965M/980M graphics processor. 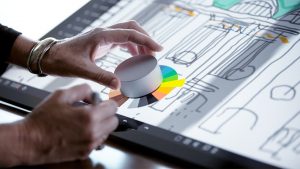 Move over mouse and keyboard, make way for Surface Pen and Surface Dial

Microsoft also unveiled a new input device: the Surface Dial. It is a squat silver cylinder resembling a hockey puck which rests on the screen. Tapping the dial brings up a radial context menu, which you can then browse by turning the Dial. In the Microsoft Studio promotional video, the application and usefulness of this device is obvious. Say you are an artist, sketching a design. You want to change the width of the pen stroke. Simply tap the dial, select the desired setting, and continue along your way. No more grabbing the mouse and clicking on tiny icon or remembering a complex series of keyboard shortcuts. The Dial can also be used for zooming and scrolling.

The Surface Studio and Video Production

The entry-level Surface Studio comes with a sixth-gen Intel core i5 processor, 8GB of RAM and an NVIDA GeForce GTX 965M graphics processor with 2GB of GDDR video memory. This is plenty for many graphics applications, but if you are using it for editing HD or 4K video, you might want to step up to either the 16 or 32GB ($3,499) Core i6 ($4,199) version. The Surface Studio isn’t aimed at video editors, and for same price you can get a much more powerful video editing machine without a touch screen.  It remains to be seen how the Surface Dial might allow editors to interact with a software such as Adobe Premiere Pro. However, if you do VFX or 3D work, and particularly if you currently use a drawing tablet, the Surface Studio might just be the perfect tool for the job.

While in the the Surface Studio might not be the game changer for video production like it is for graphic art, it is still an well-designed, exciting and innovative new product. Depending on how well it is received and barring any technical setbacks, it could prove to be a revolutionary product, one that makes us look at Windows in an entirely new light. Anyone who has used the Surface Pen knows that in many cases, it can be far more efficient to work with than a mouse. Using a touchscreen with a desktop PC is awkward, due the screen orientation and position. The Surface Studio eliminates this issue by allowing the screen to be positioned like a drafting table, which an ideal position to interact with it using a Surface Pen.

If nothing more, Microsoft has captured the imagination of the public and creatives in particular with the Surface Studio. They are sold out for pre-order online, so it is possible that this excitement will translate to sales as well. We don’t know when we will get to see one in person, but when we do, we will keep you posted.

Click the links above, call us or email us to buy a PC or Mac editing workstation