Sony is producing a second version of its very popular PXW-FS7. The Sony FS7 II announcement at NAB New York comes about two years after Sony released the reliable and affordable FS7, which has proven itself as a go-to camera for everything from documentaries and scripted dramas to corporate and web videos. The FS7 has had most of its initial bugs worked out and is already on firmware version 4, with more updates coming down the pipeline. 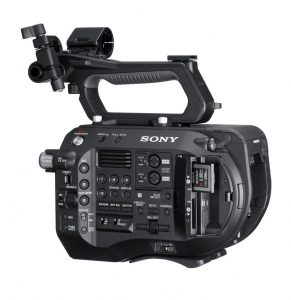 A more nuanced camera, not a replacement

Despite the name of the camera, the FS7 II  won’t replace the FS7. Rather, the FS7 II provides more features. The image quality on the Sony FS7 II remains virtually unchanged from the original, as the sensor and image processing on both cameras is identical. Sony has made it clear they will continue to sell and support the PXW-FS7 after the release of the FS7 II. The price of the upgraded model will be quite a bit higher than the original, $10,000 compared to $8,499 for the body only or $13,000 compared to $10,999 for the camera and kit zoom lens.

All of the features that have made the Sony FS7 so popular remain on the FS7 II, starting with the body and sensor, which are unchanged. The Sony FS7 II still shoots XAVC codecs as well as MPEG2.  Full DCI-4K recording to XQD cards is supported by the FS7 II, and so are all Sony and third-party accessories. Improvements are new features and improved color space.

The viewfinder assembly on the Sony FS7 II has been totally redesigned. The viewfinder now has a square rod to eliminate sagging, a common complaint about the original viewfinder. The viewfinder on the FS7 II has multiple adjustment knobs and clamps. There is a square knob which prevents the LCD screen from tilting sideways, which can be adjusted along horizontal and vertical axes. The rods are 15mm and may be used with any other 15mm rod. The LCD screen now features a pop-up shade, and the eyepiece attaches securely via a clip system. In addition, the eyepiece diopter is now a standard 32mm and is user-changeable. 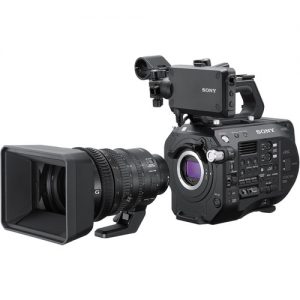 The Sony FS7 II has an updated E-mount with a locking collar, similar to a PL mount. Instead of twisting the lens itself, you insert the lens at the correct angle and turn a locking ring to secure it. Once in place, the lens is firmly locked in with no play. The system is great for those that use heavier lenses, or a follow focus. However, this is a bit more clunky to operate, requiring two hands for the user to carefully align a white dot on the lens with a white dot on the mount.

One of the most appreciated features of the Sony FS7 is the Smart Grip. The handgrip itself is perfectly molded for comfort and the arm allows you to adjust the grip for various shooting positions. The new telescoping Smart Grip can be adjusted without tools, a convenient upgrade that could eliminate the desire for the frequently purchased Shape Extension Arm. The updated grip will also be available for purchase in the future for current FS7 users. 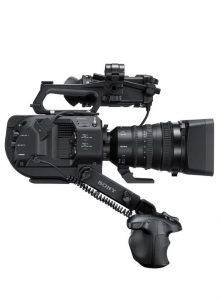 Sony first introduced an electronic variable ND filter with the PXW-FS5 camera, and has included it on the Sony FS7 II. The camera has a range of two to seven stops of ND attenuation and there are three ND modes to take advantage of that wide range.

Preset mode lets users assign three ND settings to the filter turret, useful when shooting in changing light conditions. Auto ND mode is also available giving a fixed-level exposure while using the iris control to adjust the depth of field. Surprisingly, auto ND mode cannot be selected from any of the labeled controls on the camera; it has to be assigned to one of the 10 user assignable buttons.

The Sony FS7 II supports the new broadcast standard, BT.2020, for recording and output via SDI or HDMI. BT.2020 is capable of representing the camera’s complete 14-stop dynamic range, and it records up to QFHD (3840×2160) resolution.

The FS7 II uses the familiar XQD memory card format, designed for capturing and transferring high-bandwidth, high-resolution files. Sony is also introducing a new XQD card, QD-G256E — with an industry-first 256 GB capacity – giving a recording time of approximately 45 minutes at 4K 60P and 3.5 hours at 2K 30P. Combined with a read speed of up to 440MB/s and write speed of up to 400MB/s, users can shoot for longer without needing to change media cards. 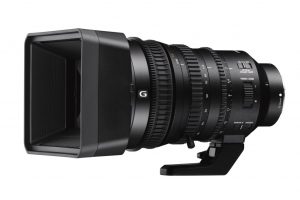 Last but not least, the FS7 II kit model includes Sony’s new Super35 E-mount lens. One great feature of this lens is the ability to switch between motorized zoom and full manual zoom. The lens has Sony’s Smooth Motion Optics (SMO) design, developed to eliminate undesirable characteristics such as ramping, losing focus while zooming, breathing and optical axis shift.

Click the links above, call us or email us to pre-order a Sony FS7 II