The quality of pan/tilt/zoom (PTZ) cameras has improved by leaps and bounds in recent years. Quieter motors, improved color and light sensitivity and better connectivity options have put high-quality live video production within reach for everyone. Sony has raised the bar to a whole new level with the release of the 4K Sony BRC-X1000 and it’s HD cousin, the BRC-H800. 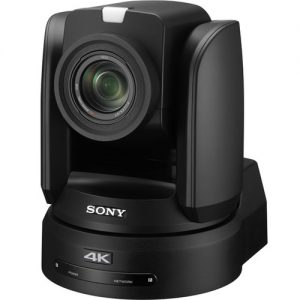 In the past, the form factor of an all-in-one PTZ camera was a major limitation to the image quality that could be produced. Most venues using PTZ cameras in a live production environment need a generous zoom range of at least 20X to be able to get close enough to the action on stage – which meant that the sensor chip of the camera had to be small enough to get a lens with 20x optical zoom to fit within the PTZ form factor. 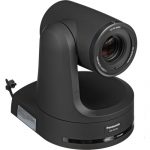 Panasonic HE-130 – The current leader of the pack

Panasonic has been the standard bearer in the PTZ camera world since the late 2000’s, when they released the AW-HE100, and they have updated it every few years, most recently with the AW-HE130. The HE130 features a 3-chip, 1/3″ type sensor and produces spectacular image with brilliant color and detail. When you look at the images that these cameras produce, you can easily see why this has been THE go-to PTZ camera for anyone who is serious about their video productions.

But that might all be changing now that Sony has released the BRC-H800 and X1000. 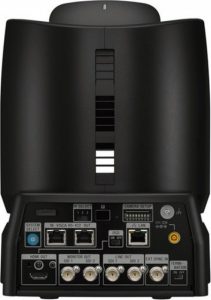 Sony’s Clear Image Zoom: Don’t call it digital zoom (Because it is so much more)

In the world of professional video, the words “digital zoom” are synonymous with grainy, pixelated, and just plain ‘no.’ Camera manufacturers advertise their digital zoom range for the sake of marketing, but the reality is that digital zoom greatly degrades the quality of the image. Digital zoom specs can be dismissed when shopping for any camera – it is the optical zoom of the lens that matters. This is where Sony has really changed the game.

Sony has overcome the sensor size limitation of PTZ cameras with their proprietary “Clear Image Zoom” technology. Clear image zoom leverages the normally unused portion of its large image sensor to double the effective zoom range of the camera. For the BRC-H800, that means an effective 24x zoom, and for the X1000 it translates to an effective 18x zoom. This isn’t a brand new technology – Sony has been using it for several years on other large-sensor cameras – But this is the first time such a technology has been used in a PTZ camera, and as you can see on this video, in many situations, clear image zoom actually looks BETTER than the equivalent optical zoom.

There is more to a PTZ camera system than the image itself – the cameras have to be controlled remotely, and unless you want to use a clunky on-screen virtual controller, you will probably be using a joystick controller of some sort.  Here again, Panasonic is the current standard with their AW-RP120 controller.  It is highly configurable, has smooth joystick operation, and has an overwhelming amount of function buttons and settings. Where it is lacking is in ease of use.  Trying to accomplish simple tasks requires scanning dozens of buttons which all have multiple functions – it has a steep learning curve. Until recently, Sony did not have a product that was even on the same playing field – Their RMIP10 controller has a limited configuration options, and actually needs to be connected to a Windows laptop for initial setup. 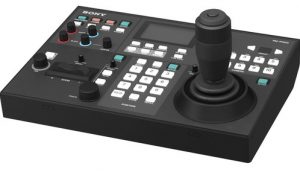 Sony has recently upped its game in this area with the release of the RM-IP500 controller. It has all the functions you would need, but it is far more intuitive than the Panasonic. When we tested ours, we plugged it in and all of the cameras were automatically found and configured. It has a larger LCD screen than the Panasonic, which not only presents the controller settings within an intuitive menu structure, but also allows you direct access to each camera’s internal settings without having to look at a monitor. The action of the joystick is beautiful – smooth and precise at the same time – with the ability to adjust the speed of your focus, pan, tilt and zoom. Presets are easy to create and recall, and there is a ‘trace’ preset mode which allows you to record a series of camera movements. Camera painting can be done right on the controller with a touch of a button, and once you have your gain and shutter speed set, you can adjust the brightness of the image with a conveniently located iris potentiometer. For additional bonus points, the Sony allows you to choose your zoom control – either via a rocker or by twisting the joystick, whereas the Panasonic limits you to just the rocker for zoom control.

So What Does This All Mean?

Because the H800 and X1000 have a large 1″ sensor chip, they can capture a crisp, clear image even in low light conditions. In our tests, we were able to leave the gain control at 0dB on the Sony BRC-H800 in all but the dimmest of lighting conditions.  Sure, you can get a similar look as far as brightness goes by cranking the gain on any camera, but you are introducing a lot of noise to the image, and the less light on your subject, the more you will need to lean on the gain, and more degraded your image will become. Also, in our opinion, Sony also has the best PTZ controller on the market.

Here is very short video we made comparing some popular PTZ cameras on the market – the Panasonic HE130 and the Sony BRC X1000 are at the end.  You can see that the Panasonic has a warmer image, but the Sony has better low-light sensitivity. This is just a quick zoom in and out, and to really get the feel for the images the cameras produce under different conditions, you needs to see it in action. If you want to demo any of these cameras, email us or call us!

The Panasonic HE130 is still a great choice, and there is a reason they are the current gold standard in the PTZ world. However, with The Sony BRC-X1000 being your only choice if you want 4K, and the BRC-H800 giving you a superior image for $1,000 less than the Panasonic, we feel that the Sony are the best value on the market right now.

This is really a breakthrough for low-light environments such as concert halls, theaters, and churches that want to achieve a studio-quality image for recording and broadcasting, and streaming live performances.