Panasonic Releases The Most Advanced PTZ Camera Ever Made

The new AW-UE150 Camera features a 1″ inch sensor, a wide viewing angle and supports UHD/4K 60p with HDR. Panasonic also has a new PTZ controller with an LCD screen to pair with the camera.

Until recently, if you wanted a true professional quality live video production system using remotely controlled robotic cameras, you had to purchase separate pan-tilt heads and standalone box cameras. Panasonic paved the way for high-quality PTZ video production with the popular AW-HE130 and more recently, Sony upped the ante with the release of their BRC-H800/X1000 cameras by including a 1″ image sensor, 3 times the sensor size of any self-contained PTZ that came before it. A few years back, I was talking to a rep from Panasonic and I asked him if they had any plans to respond with a 1″ sensor PTZ camera of their own. Well, it looks like we have our have our answer. The new AW-UE150 elevates PTZ video production to a whole new level. Panasonic has demonstrated, once again, that they are the industry leaders in the field of high-quality robotic camera production.

A Wealth of Advanced Features

Before I dig into greater detail about what makes this new camera so great, let me list off the impressive list of the AW-UE150’s features: 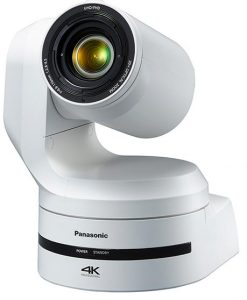 Panasonic has also released a brand new PTZ controller with an integrated touch screen. It is much easier to use than the previews Panasonic flagship PTZ controller, the AW-RP120. I will talk more about this below.

Let’s dig into all of the features that make this camera so great. We will start with the most important feature, which is the 1-inch MOS image sensor. 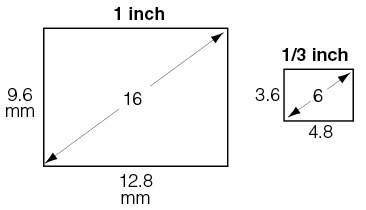 |Even if the Panasonic AW-UE150 had no other advancements over it’s predecessor other than the increased image sensor size, that would be enough to make this a remarkable camera. The AW-HE130 had a 1/2.86 inch, 3-chip sensor, which, despite its small size, punched above it’s weight class in image quality and low-light sensitivity. However, the UE150 has a sensor that is roughly three times larger. With a one-inch sensor, you won’t have to increase the gain to get a viewable image, resulting in almost imperceptible noise, even in low-light conditions. Additionally, and for the same reason, not having to gain up the image means that you will enjoy a very wide dynamic range. This is great for areas such as churches in which some spots might be brightly lit, say by light entering a window, and other spots might be in a shadow. With this camera, you will no longer have to choose to between seeing the detail in the shadows or the highlights of the image.

Get Close – Optical 20x Zoom with up to 32x ‘intelligent zoom’

One of the biggest challenges in designing a PTZ camera with a large sensor is fitting a zoom lens that will cover the sensor into a compact form factor. The Sony BRC-H800/X1000 solves this mostly by featuring a lens with a limited 10x optical zoom, which is compensated for by a zoom technology called clear image zoom’ which leverages the unused part of the large image sensor to provide up to a 24x effective zoom in HD mode.

Panasonic has one-upped Sony by adding a 20x zoom lens to the UE150, and they have accomplished this mostly by making the chassis bigger. While the footprints and heights of the H800/X1000 and the UE150 are similar – about 8″ x 10″ x 9″, the form factor of the Panasonic allows for a larger lens with while taking up a similar amount of space. That is why, if you look at the specifications of the Panasonic UE150, you will see that after listing the dimensions it says “excluding protrusions.” This is because the large lens protrudes quite a bit from the rest of the chassis.

Panasonic also has an equivalent technology to Sony’s ‘clear-image zoom’ called ‘intelligent zoom’ or ‘i.Zoom’ for short. In 4K mode, this will get you to a 24x effective zoom (compared to 18x on the Sony) or a 32x zoom in HD mode (compared to 24x on the Sony).

If it seems like every feature on the Panasonic AW-UE150 is unprecedented, that’s because it is. Another one is the extraordinarily wide horizontal viewing angle of the lens, on the wide end of the zoom range. For comparison, the AW-HE130 features a 60.2 degree AOV and the Sony BRCH800/x1000 features a 64.6 degree AOV.

High-Resolution AND High-Framerate – Why Choose? 4K/UHD output at up to 60p

While this is not the first PTZ camera with 4K capabilities – the Panasonic AW-UE70 and the Sony BRC-X1000 also have 4K – It is the first PTZ camera that outputs in all formats and frame rates all the way up to 2160/59.94p. Additionally, it will output the 4K 60p video via a single 12G-SDI cable, instead of being limited to 30p over HDMI like the Panasonic UE70 or 30p over funky and unsupported dual-link 3G-SDI like the Sony BRC-X1000.

Another Industry First – A PTZ Cam with HDR (With an Asterisk)

Once again, the AW-UE150 blazes the trail by being the first PTZ camera with any kind of HDR support. In this case, it captures a high dynamic range and encodes it in Hybrid Log Gamma, or HLG. Hybrid Log Gamma is basically a method of delivering standard and high dynamic range content using the same video signal. Televisions that support HLG will recognize the extra color information, while non HDR TVs will simply ignore it. Andy Madden at whatthihi.com explains it thusly:

With low-light content in an image, the HLG system employs the typical gamma curve approach to rendering picture brightness that’s been a feature of TV playback for decades. This means that these parts of the HLG signal can be recognised by SDR TVs and played back normally.

However, the HLG signal also applies a logarithmic curve to the high-brightness parts of its image data that’s ignored by SDR TVs but can be recognised and worked with by compatible HDR TVs, opening up an image with a much wider brightness range.

One thing to understand about HDR, is that it’s an emerging standard – it is not widely implemented yet. Unlike other HDR standards such as Dolby Vision or HDR10, it is a compromise, in that it delivers an imperfect SDR and HDR signal in order to avoid having to use two signals. But because only one signal is needed and because it doesn’t require a complete video infrastructure overhaul, many people agree that this will be standard on most television sets in the future. 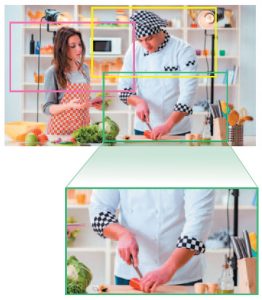 Just having the ability to output a 4k image and an HD image at the same time is a pretty neat feature that could find many uses in various scenarios, however, the Panasonic AW-UE150 takes it more than just a step further with an image cropping feature that lets you essentially create up to three virtual HD video feeds from a single 4K image.

Not everyone who captures video in 4K is going to deliver the final product in 4K. Capturing in such a high resolution gives video editors the ability to perform motion and zoom effects in post-production without any loss of video resolution. In a live production, however, this is not as easy to do. There are products on the market such as the KMU-100 from Datavideo (MSRP $3,000) which takes in a single 4K feed and allows you to crop the video into multiple HD video feeds, which can then be outputted to a video switcher for a virtual multi-camera production, using only one camera. Panasonic has incorporated some of this functionality in the new UE150.

Manage and Control From Remote Locations with Improved Web UI

All of Panasonic’s current-generation PTZ cameras already feature a very powerful built-in web UI that allows you to preview and control the camera, program and recall presets, adjust settings and broadcast IP video streams. Panasonic has improved upon this with a more user-friendly interface and other advanced features like storing thumbnails for camera presets. In addition to web browser control, Panasonic has recently released a camera control app for IOS and Android as well. 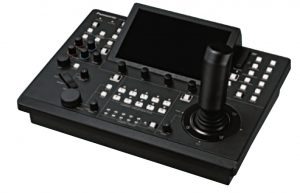 Panasonic’s previous flagship camera controller, the AW-RP120, is very full featured, almost to a fault. With it’s overwhelming matrix of buttons, indicators, rockers, knobs and dials, almost any function can be accessed without navigating through menu hierarchies. However, if you haven’t taken a course or studied the manual, it can be a bit overwhelming to use. The AW-RP150 employs an angled touch display to allow the user to easily change settings and make adjustments, while also functioning as a video monitor.

Conclusion – If You Are Looking for the Best PTZ Camera On the Market, and Money is No Object, Look No Further 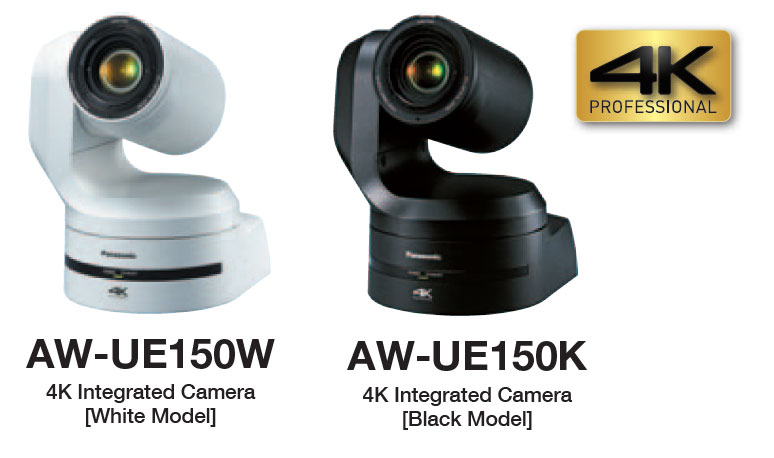 There is no question, this is the most powerful, feature-packed PTZ camera ever made. The AW-UE150 is a great choice for anyone looking for the most professional quality video in a live production setting without requiring human camera operators. With a one-inch sensor, a generous zoom range, a wide angle of view and 2160p60 HDR output, you will be lacking for nothing with this camera.

If you are already using Panasonic cameras and want to step your video quality up to the next level, this is also a great choice.

All these features come with a price, however, as the camera retails online for $9,995.

Even at that price, the Panasonic AW-UE150 still presents a tremendous value. It is in a class by itself, and anyone out there who is looking for the absolute best PTZ camera on the market should be very interested.

If you are interested in the Panasonic AW-UE50, Z Systems is the best place to get it. If you call us, we can guarantee you the absolute lowest price on this camera, and we can help you with any other questions you may have about your live production system.