Click here to learn about all products in the DDP series. 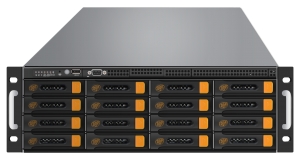 DDP – Dynamic Drive Pool – refers to a pool of storage from which virtual or logical volumes can be created and used via ethernet, hence ethernet SAN.

What is the technology behind DDP?

Simply put, the DDP is a storage server which connects to standard Ethernet and provides high bandwidth project and file level based sharing. The iSCSI experts at Ardis Technologies developed AVFS, the Ardis Virtual File System, which is the technology behind the Dynamic Drive Pool. iSCSI is just like FC a block I/O technology. Because iSCSI exclusively uses Ethernet, there is only one network infrastructure to consider: standard Ethernet with standard Ethernet switches. AVFS is the metadata controller responsible for managing access on the Ethernet SAN, providing simultaneous read and write access for everyone. Applications supported include Avid, Apple, Adobe, Autodesk, Digital Vision, Grass Valley, Resolve, DVS, Digidesign, Nuendo, Sequoia, Fairlight and more, all out of one box with sustained data rates 2-3 times higher then regular NAS systems.

What special features does the DDP offer?

The most important feature is the DDPs very high sustained data rate. Additional features are : 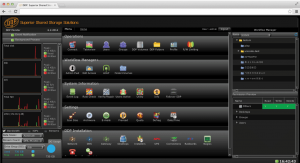 On the left the screen shows the various modes of activity in streams, bandwidth or IOPs. Also alert messages are notified there. Pressing one of the icons in the middle part of the web interface opens up that particular function. E.g. to edit, edit or remove a user, the user icon is pressed. DDP volume or foldervolumes can be made, desktops, bandwidth limiting, users and groups can be entered. Access rights can be managed via the workflow manager.
On the right is displayed which users have access to which volume, folder or folder volumes with what rights.

Maintenance of the DDP is also controlled by the web interface.

DDP bandwidth limiting can be set per desktop, but more importantly, the data rate entered in DDP’s Graphical User Interface is negotiated when confirmed. This means that there are no TCP/IP packet drops, and therefore no network congestion.

Applications such as Edius, Digidesign, Fairlight and Nucoda come with a locking mechanism to prevent overwriting a project open in r/w mode. DDP software fully supports these locking mechanisms

Called Multiple Connection per Session (MCS), it is not the same as bonding. Bonding does not give you a bandwidth increase per desktop; MCS does. When two 1 GbE ports are paired, it increases the bandwidth from 100 to 180 MB/s. 10 GbE ports can also be combined.

Avid editors familiar with Avid storage will not notice a difference when working with the DDP. Companies with edit software between versions MC 3.5 – MC 7, whether on Mac or Windows, can connect to the DDP. No need to shrink or extend Avid MediaFiles directory volumes anymore: 1 and 10 GbE ports can be mixed and Linux apps can be connected.

Upgradable with 1 and 10 GbE ports

External storage is available for DDP16D or larger. These updates are also available years afterwards.

Use pre-read functionality to cope with the limited FinalCutPro buffering capability and with Digital Intermediates, such as 2K & 4K image sequence material.