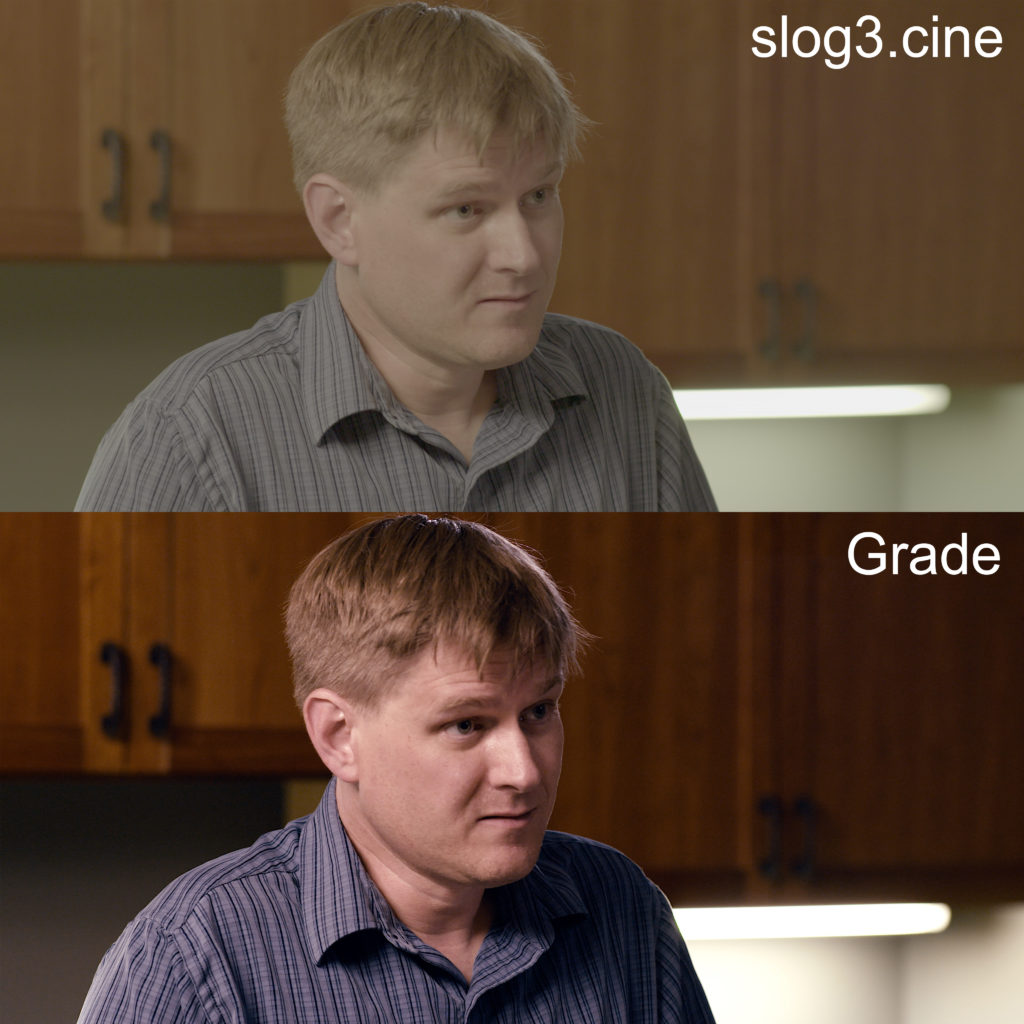 Last Friday evening I shot a short narrative script here in the Z Systems shop using one of our Sony PXW-FS7’s and other equipment from our rental pool.  I wanted to give you guys a very brief introduction to how I have been working with Sony’s slog3.cine footage from that project.

First, a little bit about the setup I had for this shoot.  The camera was shooting in 4k DCI 24p and we were using Zeiss CP.2 primes, the image above was on the 85mm.  Our key light was a 4′ KinoFlo 4 bank light with only 2 banks lit and coming through a diffuser.  We used a pair of LightPanels 1k spots, diffused and dimmed to around 30% for hair lights, and filled using a large reflector low and angled up on the key light side of the actors.  As you can probably tell, that is not a whole lot of light, certainly far less than I am used to working with, but more than enough for the FS7.

As you can see on the top of the above image, the slog3.cine profile is incredibly flat with almost no contrast between the lights and the shadows and very desaturated color.  If you have worked with log footage before that comes as no surprise, but can be quite shocking the first time you see it.  The graded image on the bottom did not take as much work as you might expect.

The first thing I did was bring the footage into Final Cut Pro X and place the clip into the timeline.  I then used Pixel Film Studio’s LUT Loader (currently free) to load a .CUBE file I downloaded from Alistair Chapman.  .CUBE is the standard 3DLUT file type.  This brought back a lot of the contrast and color, but LUT’s are only a starting point.  The nice thing about the Pixel Film Studio’s LUT Loader is that it has some great tools built into the effect to help you perfect your look, including color wheels for highlights, mids, and shadows, as well as sliders for other aspects of your grade.  After a little bit of playing with the wheels and sliders I was pretty happy with the look.

From there I fiddled with the exposure just a little bit more using FCPX’s built in color correcting tool, threw on a sharpening layer and I was done.  It’s not perfect, but for a quick example I think it looks pretty good.  All together it took me probably 5-10 minutes of adjustments to get to the above graded image.  Really dialing in your color takes a lot of time and practice, but is well worth the effort and will make your project look more film like.

So there it is, a very brief introduction into working with slog3.cine.  In the future I will do a full write up on the whole shooting and editing process for the short film we shot so keep your eyes open for that.