LTO-8 And The Latest LTO Roadmap 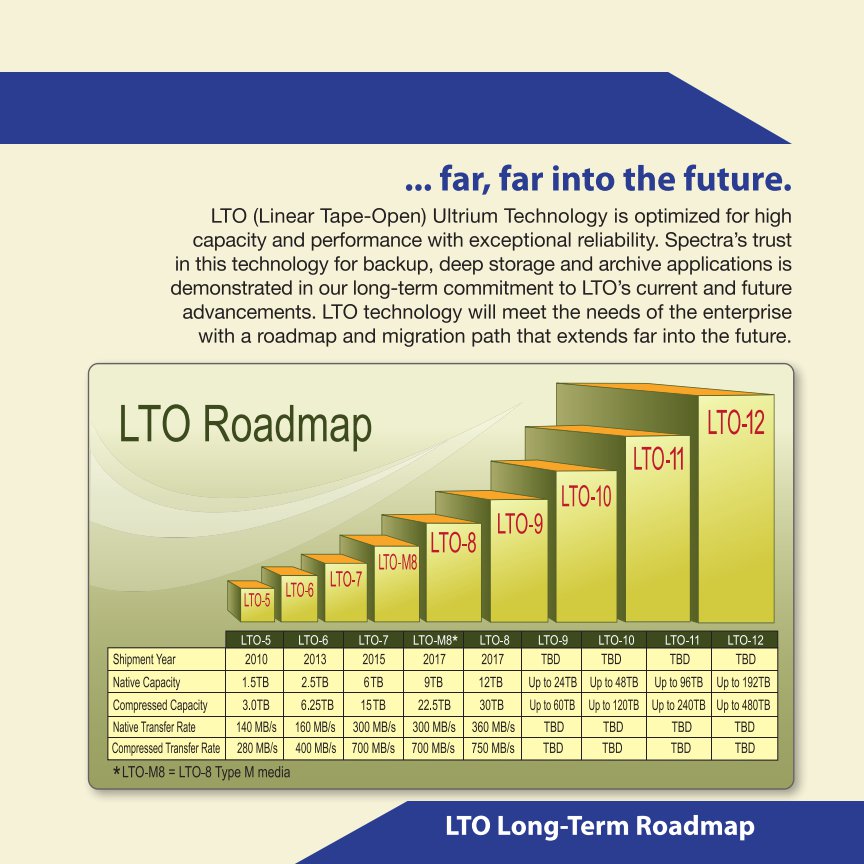 The big news here is that LTO-8 drives can not read  LTO-6 tapes.  They can read and write LTO-7 tapes.  In the past, LTO drives could always write one generation back and read 2 generations back.  We believe this is because LTO-8 drives utilize tunnelling magnetoresistive (TMR) drive heads, instead of the giant magnetoresistive (GMR) drive heads used in previous LTO tape drive generations.

Here is a chart with some rough time  and capacity estimates:

LTO – The Standard That Isn’t … Standard

What follows here is even more geekiness and dorkiness diving a little deeper into LTO.

Your Choice of Media Makes a HUGE Difference!

This is quite confusing and complicated.  And there is information on multiple levels / dimensions.

Here’s the bottom line:  Call us to purchase the correct, properly cleaned media for use in your system.  It will save you tons of maintenance headaches down the road.

Special thanks to Dan at Midwest Technical Sales and Service for this information.

The HP media has a rougher surface than the Fujifilm media.  We have observed significant debris build up when using HP media in IBM tape drives.

HP and IBM use different roller guides.  HP used to rollers which are larger than the IBM rollers which there are 4 in number.  HP rollers are smooth and only have 2 roller guides. IBM rollers have what could be called a surface with screw threads on 2 of the 4 rollers.  The research on the screw threads is that IBM found that it reduced the tape flutter over the data read/write elements on the head assembly.

The introduction of LTO-6 drives has bought with it a new tape media technology.  Historically, all LTO media were based on Metal Particle (MP) technology, however, a new and additional technology has been introduced with LTO-6, namely Barium Ferrite (BaFe).

Why the 2 technologies, and where should they be used?

100% of LTO cartridges before LTO-6 were MP.  That’s 200 million tapes!  MP has offered robust and proven data protection. With LTO-6, however, it has reached its potential based on its areal density.  In fact, the areal density requirement for LTO-6 is actually the same as LTO-5 … the number of tracks has however increased.  MP technology will not cater for the capacity demands of forthcoming LTO-7 and LTO-8 technologies.

BaFe particles are smaller and have better magnetic potential.  That becomes significant in the future as capacities increase but has no bearing for LTO-6. Both technologies perform equally from a performance and capacity standpoint, and there is no discernable difference in reliability.

HP, being the technology and market leader in LTO technology, has uniquely opted to introduce both technologies from the outset.  The other 6 tape manufacturers have opted for one technology or the other, with some planning to possibly introduce the alternative sometime in the future.

HP recommends that customers continue to use the proven MP technology with LTO-6 drives.  Note, however, that if for some reason an end-user has opted to standardize on BaFe tapes, these are also available with HP branding.

You only have one choice here and that is Barium Ferrite tapes.

executive summary by John Z: TLR is a new, faster, fancier way of writing data to an LTO tape which will cause compatibility headaches for people using older drives and interface cards.

(note:  this content is from yoyotta.com’s web site – thanks Martin!):

You can also check out lto.org  and  wikipedia for more information.