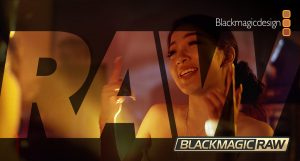 What is Blackmagic RAW

Blackmagic RAW is a modern codec we designed as a replacement for both RAW and video codecs, because we wanted it to be very easy to use, very fast and much higher quality.

We have a video that explains all about Blackmagic RAW if you would like to watch it.

Blackmagic RAW is much more intelligent than simple RAW container formats like the CinemaDNG format we have used in the past, because it understands the characteristics of the image sensor and the camera’s color science. This means we get much more cinematic images and the quality is much better for smaller file sizes.

Another big feature of Blackmagic RAW is how it’s designed. We have done a partial de-mosaic in the camera, so that part of the processing pipeline has been hardware accelerated by the camera itself. This means Blackmagic RAW does not load up the software with lots of processing and so the result is incredibly fast playback and faster rendering.

We designed Blackmagic RAW to be a replacement for both video and RAW formats. It’s really dramatically better than video codecs because the images don’t suffer from the 4:2:2 video filtering. Plus compressing video is much more noticeable as image artifacts. But Blackmagic RAW is also better than other RAW formats such as CinemaDNG because it’s a single file, is hardware accelerated by the camera so it’s much faster, you also have all the color detail and you get full RAW adjustments.

When it comes to metadata, Blackmagic RAW can embed metadata into the file itself, as well as add sidecar files that means users can add their own metadata. A good example of how this works, is you could record to Blackmagic RAW with camera settings, however when you do RAW adjustments in DaVinci Resolve, you can save that into the sidecar files and all other software that reads the files will see those changes.

Where this is really powerful is when working in video gamma. If you select video gamma in the URSA Mini Pro camera, you will see video gamma if you edit the files. But it’s only the metadata in the file that’s telling the software that the files are video gamma. Underneath they are always film gamma. So if you ever want to color grade the images, you don’t get clipped whites and blacks, and all that film dynamic range is there. When you pull up the blacks, or pull down the whites, all that detail will just appear!

The good news is it’s easy to add Blackmagic RAW support into any software because we have bundled up all the downstream software processing into a single software library that’s free for developers. This library is available on Mac, Windows and Linux and it means all the complexity of using Blackmagic RAW has been handled and reading sidecar files, setting RAW parameters and all the color science is included.

This ensures you get consistent images between different software applications and across operating system platforms. DaVinci Resolve 15.1 also uses this library so any RAW settings changed in DaVinci Resolve will be seen by other software. We have also built a simple app called Blackmagic RAW Player that lets you review Blackmagic RAW files.

The good news is this update is free of charge. If you own a Blackmagic URSA Mini Pro camera then you can download a public beta for your camera that adds Blackmagic RAW and it also upgrades your camera to Generation 4 Color Science.

So you can start shooting in Blackmagic RAW immediately, we are also releasing a new version of DaVinci Resolve 15.1 today. This release has several new features, but most importantly, it includes support for Blackmagic RAW.

You can also download the Blackmagic RAW Player from this page and it lets you play the files. Perhaps you can download DaVinci Resolve and do some test color grades on the files. You will be able to go to the camera tab in the primary color corrector area and see the RAW settings. You can even save sidecar files.

If you want to add Blackmagic RAW support to your own software, the Blackmagic RAW Developer SDK is also available on this page and it includes sample code so you can see how to use the library.

Please check out our web site for more information. I am personally very excited by Blackmagic RAW and the feedback from the beta testers has been incredible. I was playing some Blackmagic RAW clips yesterday and then realized I was playing them from an old USB mechanical hard disk. I cannot play 4K video files off this disk, but I could play 4.6K Blackmagic RAW files perfectly. It’s quite amazing how good the pictures look at small file sizes. It’s very exciting.

Z Systems is your #1 source for professional video systems and service in the Twin Cites.