Click above for resources on specific Sony 4k camera models. 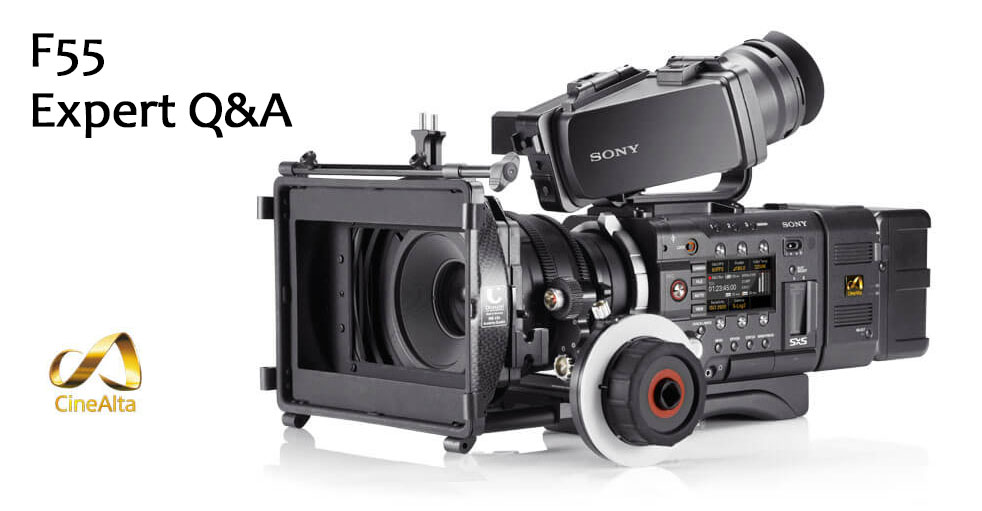 Since the release of both the Sony PMW F55 & Sony PMW F5 there has been much talk of their differences and benefits, we asked 3 experts in their field to answer some of the most commonly asked questions.

F55 has F65 Colour Gamut – Can you explain the benefits of this?

The extra gamut is of most interest to film makers. You can turn it off so the F55 is the same as an F5. I think most people will have a fairly clear idea about the various gamma choices since they are an expanded version of standard and hyper gamma. These basically give you a signal that can be directly broadcast or graded with minimum intervention.

S-Log2 is quite different and simply an attempt to maximise the captured information and thus the dynamic range of the subject. During the process the whole image range is compacted in the available data space therefore the image appears rather low contrast and ‘milky’. It is fair to say that using S-Log2 makes a 100% grade of the shoot mandatory.

S-Gamut is a mode on the F55 where the colour information is processed into a smaller space. The sensor itself supposedly produces more intense colours and there is a danger that the normal colour system would clip these and reduce the detail. Using the S-Gamut setting preserves these chromatic highlights rather in the same way as S-Log2 preserves luminance highlights. Note that the S-Gamut setting is only available in conjunction with S-Log2.

Just to emphasise the point, selecting S-Log2 and S-Gamut reduces the perceived contrast and colour on the recorded clips. It is only after grading that the final image quality will be revealed.

The F55 has a wider Colour Gamut then the F5 (it’s the same as the F65), so in basic terms this means that the colours it captures is greater than the film is capable of, so the colours are closer and more natural to what we see with our own eyes.

The F55 colour filter array is identical to the F65. The Colour Filter Array (CFA) describes the red, blue and green colours marked on top of the sensor pixels which allow it to read colour information (red, green & blue). This helps determine the range of colours that the sensor can capture. The range of the CFA is not as high in quality on the F5.

Colour Gamut is basically a colour space and the range it can produce.

Can you explain the Global Shutter feature on the F55 and why explain why the F55 has reduced sensitivity of 1250?

The F55 has a global shutter courtesy of a special CMOS sensor that has a memory cell built into each pixel. This memory steals some space from the active area of the pixel which partly explains the reduced sensitivity. It is also possible the increased colour gamut somewhat reduces sensitivity. The global shutter removes any ‘rolling shutter’ problems with picture wobbles (‘jellymode’) and flash photography.

This helps with fast moving subjects that people may be shooting as well as tracking shots. Due to the Global Shutter, sensitivity is reduced to 1250; this is actually a different sensor to the F5. We are finding that the F5 is too sensitive and even with the built in ND’s 1250 is more than enough, for example the Alexa and Red are 800. Whilst on the subject of ND, people should ideally be using IR ND’s with these cameras, or else colour shift will be experienced.

Global Shutter totally eliminates rolling shutter skew. The pixels are all lit simultaneously at the same time rather than the traditional row by row the F5 uses. With traditional rolling shutter you get banding effects as well as bent edges on fast movement caused by the lines not being scanned completely before it completes a row and starts the next.

Procam will also be providing all our F55s with OLED viewfinders, what are the advantages to this?

The OLED viewfinder is simply great in terms of a superb sharp image and true colours in a compact package.

The resolution is 1280 x 780 on the OLED compared to 960 x 540 on the LCD equivalent, the refresh rate, brightness and contrast is also better.

The OLED viewfinder has a range of over 12 stops; the other viewfinders have a REC709 range of 7 stops. Also it’s 720 in resolution.

What are your opinions on the v1.13 firmware update and how will this will improve the cameras?

Apart from the added feature which gives the user ability to adjust exposure index (EI) whilst shooting raw, this new firmware update seems to have addressed the issue of “Dropped Frames” during XAVC HD S&Q mode when shooting 50-60fps.

The new features are primarily – selectable ISO sensitivity & external remote record control via the DC connector which is much sought after and accelerated.

This now gives an adjustable Exposure Index (EI) while shooting Raw. Previously when recording in Cine-EI mode (Raw), you could only monitor and record to SXS cards in the native EI value of the camera, (Slog 2 Base ISO only 1250 ISO or 0DB) with the recent update, you can now change gain and exposure to record internally to cards while the raw files are always base setting’s 100% all the time.

This is useful as it provides a quick way to monitor changes on set that may be made in post-production and gives the editor an idea of what end product.

The F55 also boasts QFHD & 2K recording formats which are not available on the F5, what are the benefits of these additional features?

Quad Full High Definition (QFHD) is a consumer version of 4K being comparable in size to four 1920×1080 images, which is slightly under Cinema 4K (4096×2190). Because Cinema 4K requires an aspect ratio of 17:9 to be properly displayed, this will clash with Consumer 4KTV’s which have a ratio aspect of 16:9. The QFHD recording format shot with the F55 is a nice way around this.

This means you can record 2k or 4k on the internal SXS cards which is not a RAW recording as it would be using the AXS-R5 Recorder. You will also be able to recorder at 50mbs, 422 as a proxy simultaneously.

The two cameras will shoot identical codecs and frame rates up to 2k internally at MPEG 2, XAVC and SR (future upgrade) The big difference is you can shoot 4k and QF 4K internally only in the PMW 55 and not in the F5. Both cameras will though record raw to the AXS-R5

We are finding our clients prefer the F55 over the F5, what do you think are the main reasons for this trend?

Certainly the F55 having the advantage of global shutter has pushed people’s preference away from the F5. However the extra frames from the F55 (up to 240fps with future firmware upgrades) add to its slow motion capabilities.

The 2 major reasons are: The F55 uses a global shutter which eliminates any issues with rolling shutter (skew) which is inherent with all CMOS cameras. It also records a wider colour gamut, which basically means it will capture more natural colours to what we see with our own eyes.

Also, in the summer, you’ll be able to recorder 180fps on the internal SXS and 240 on the external R5 RAW recorder

F55 has a global shutter so no banding or skewing to the image, it also has a superior CFA this is the same as the F65.

The F55 will shoot up to 180fps internally whereas the F5 will shoot 120fps when both cameras are set to 2K/HD formats.